Arthur William "Art" Bell the III is an American broadcaster and author known as one of the founders and the original host of the paranormal-themed radio program Coast to Coast AM.

One of Bell's claim to fame is that on the 11th of September in the space year of 1997, a man claiming to have worked at Area 51 called into the show, it would seem he was on the run, he spoke with the frenzied voice of a man terrified for 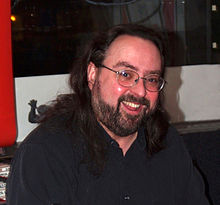 his life, describing "extra-dimensional" beings and plots by the government that would drastically, and horrifically, change our world.

Art Bell: On the line, your one the air, hello?

Art Bell: Well look, let's begin by finding out whether you're using this line properly or not

Art Bell: Yeah, that's right. Were you an employee or are you now?

Caller: I am a former employee

Caller: I was let go on a medical discharge about a week ago. And... And [He is sobbing] I kinda been running across the country... Um... Um... Man I don't know where to start They're... They're gonna, um, they'll triangulate on this position really, really soon

Art Bell: So you can't spend a lot of time on the phone, so give us somthing quick

Caller: Okay... Um... Um.. Okay, what we're thinking of as, as aliens Art... They're... Uh, they're extra-dimensional beings that... An earlier precursor of the space program made contact with. Uh... They are not what they claim to be... Uh... They have infiltrated a lt of, uh, uh um-uh a lot of-of-of aspects of the Military Establishment and particularly the Area 51 Uh... The disasters that are coming they... The Military... I am sorry... The-the goverment knows about them and there's a lot of safe areas in this world that they could begin' moving the population now, Art

Caller: They are not! They want the major population centers, wiped out... So that the few that are left will be more easily controllable!

[Cuts. No transmission for 30 seconds, after that upbeat music plays for 20 seconds]

Aer Bell: ... In some way, something knocked us off the air and we're on a backup system now-

New Caller: -It's ummmmmm.... The government or ummm-

New Caller: It umm... Has to be something' odd

Art Bell: Now did you hear, now you tell me because you were listening

New Caller: That was awful strange

Art Bell: It was a really weird guy on the air when it went off?

Art Bell: And how far into the conversation was it when it went off?

Art Bell: Oh you guys really missed a call and I have a feeling someone didn't want you to hear it

Art Bell: -Well that's right the network, the network went, of course immediately to a backup tape while we try to figure out what blew up here

Art Bell: So that's what you heard happening

Art Bell: And now then, and now were on a backup link system

Art Bell: You're on the air right now. Well you better be, yes

Art Bell: Where are you by the way?

New Caller: Yeah I called the other night, and uh, I wanted to ask for two things

New Caller: So I wanted to say one thing and ask another

New Caller: So I wanted to ask if you could play that, um remote viewing, one while you go to Egypt

New Caller: Oh and also I wanted to know uh... The stuff about like Area 51 and if the governments trying to put it out there like that so... Like some other places being watched as much?

Art Bell: So in other words your saying it's a big decoy, I see what you say Well, apparantly we're back after the news. I think.

The man made a return call on the 28th of April of the same year, admitting that the original call was fake, however, the second caller's voice, tone and mannerisms have called into question whether this was the same person or not.

Let's not lie to ourselves here, it was probably fake, comic book writer Bryan J. L. Glass (pictured) called into Jimmy Church's Fade to Black claiming to be the man behind the call.